The home of the famous Isle of Wight Ghost books

Many thousands of ghosts, spirits, poltergeists and apparitions haunt the Isle of Wight - acknowleged as the world's most haunted island. This incredible supernatural activity seems due in part to the powerful unseen energy or 'ley' lines running under this British island, situated only 70 miles from London, which now attracts thousands of ghost-hunters from all over the world.

This diamond-shaped island off England's south coast, a covering just 147 square miles, has some 160,000 'living' residents who share their home with many hundreds of ghosts.

Known as Vectis by the Romans who built villas here, the Isle of Wight has a wealth of historic houses, ancient churches and castles. Queen Victoria made her home at Osborne House; King Charles I was imprisoned at Carisbrooke Castle, and writers including Keats, Dickens, Tennyson and Longfellow stayed here.

This magical island has a dark side. Ghosts and spirits abound and the Isle of Wight has a supernatural energy that's particularly evident in some very haunted hotspots. Strong energy or 'ley lines' running under the Island may be responsible for charging the earth's electro-magnetic vibrational field here, so increasing the psychic potential for ghost sightings.

The new look Ghost Island Website is now live, please spend some time to have a look round, including your Stories and Photos and the updated Ghost Map.

We have also refreshed the Face book and Instagram pages, please follow the links at the bottom of the page...

All Eight of Gay Baldwin's ghost books, volumes 1 to 8. These books normally sell at over £70. Hundreds of ghost stories in these eight best-selling books all signed by Gay herself. For just £60

Postage via DHL is FREE to UK customers.

Read hundreds of amazing true ghost stories, tales of poltergeists and hauntings in these eight best-selling Isle of Wight Ghost books, researched and written by Gay Baldwin. Don't forget to check out our special offers, and look at the DVD, map and e-books as well.

If you have any real stories of ghosts, spirits, hauntings, spooky happenings, supernatural tales or paranormal pictures you would like to share with me, I would love to see them.  I am always keen to hear of haunted houses, ghostly smells, ghost pictures and any new hauntings on Ghost Island

If you can't visit Ghost Island in person, you can still discover the many haunted places and some of the haunting TRUE ghost stories, by buying the extensively researched books, e-books and DVD, which are full of real, and sometimes scary ghost stories. Visit the book shop and then place your order so you can experience the strange and haunting atmosphere of Ghost Island for yourself.

The Original Ghost of the Isle of Wight Book

This original book, the very first in the series, was published in 1977 and was revised and updated in 1997. Now in its fifth reprint, this 78-page book contains 42 true stories of ghosts.

Book 3 - Ghosts of the Isle of Wight

The number of apparitions and haunted places on Ghostisland continues to
grow. This third book in the series contains more completely new stories from
the world’s most haunted island. Visit haunted hotels, houses, hospitals, inns,
mills and shops,

Ghost Island brings you 63 true chilling tales and eerie encounters from the World's Most Haunted Island. All new stories in this 144-page, fifth book in the Ghosts of the Isle of Wight book series include: The Curse of Dodnor, Dead Man Walking, A Tragic Princess and the Railwayman's Ghost. Learn of the power hungry spirit who ran up a huge electricity bill, as well as more spooky happenings at Ventnor Botanic Gardens.

This seventh book in the best-selling series brings you more than 70 supernatural stories from the world's most haunted Island. With 160 pages of eye-witness accounts of ghosts and hauntings, there is even a photograph of the ghost of Queen Victoria herself, at Osborne House. 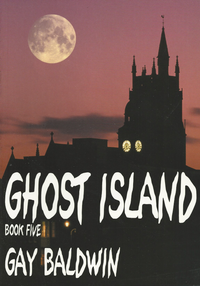 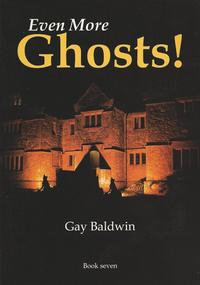 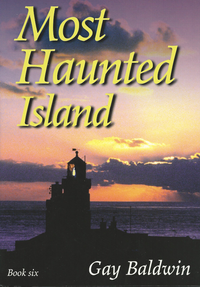 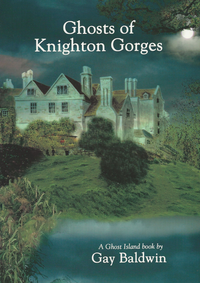 Newly updated and revised book with new stories and photographs, More Ghosts is the second book in the series.

This fourth 142-page book of true ghost stories from Ghostisland brings a rich mix of new haunting tales from all over the Isle of Wight. Lots of photos and eye witness accounts of ghosts

In this 152-page sixth book in the best-selling series, you can read 78 stories, including for the first time ever, tales of Royal Ghosts at Queen Victoria's Osborne House - never before have the authorities allowed these stories to be told. Meet phantom Roman soldiers who still patrol close to an excavated Roman Villa. See the amazing photos of the lonely Lighthouse Ghost.

Gay Baldwin’s LATEST book Ghosts of Knighton Gorges - the eighth eighth book in her best selling Isle of Wight ghosts series - is now published.  Read all about the history and ghosts of this vanished mansion - has 176-pages and contains nearly 100 black and white and colour illustrations.